There are many guys out there who claim women only like bad boys. Heck, I used to have this belief.

On several occasions, when it came to a female I was REALLY INTERESTED IN she’d never end up with me and instead she’d be with a guy who was considered a ‘bad boy’.

He typically did at least one of the following things to her:

-Treat her with disrespect

-Not consider her wants or feelings

And here I was—such a nice, fun guy… why didn’t she like ME on a romantic level?

EASY—because I wasn’t triggering ANY of the good, exciting emotions within her (all I had been giving her were emotions of BORING and PREDICTABLE).

More on those good emotions later….

Getting back to my wussy days (my teenage years)… I was incorrect in having the belief that women only like bad boys.

FACT: Women don’t only like bad boys or asshole guys.

And years ago, the reason I claimed women did was because I couldn’t handle the fact I WAS THE PROBLEM. 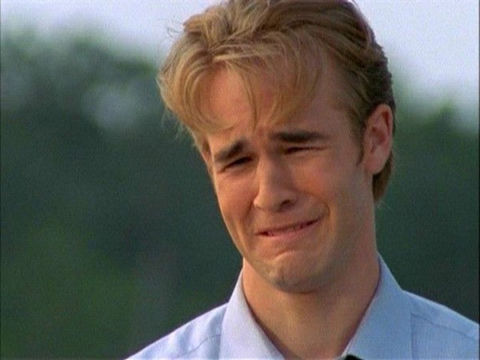 Think Women Are Attracted to This?

Instead of being a man, looking inward and taking responsibility for my failures with the women I REALLY liked I instead acted like the problem was exterior—or outside of me—that women were the problem because they were the ones who were going after the bad boys and not nice guys like me.

My, how ignorance is such a powerful drug.

*Current Karl B. looks at old Karl B. and shakes his head in dismay*

And the funny thing was I was attracting women way back then. But the women I hooked up with… I wasn’t into (meaning they were fun to do sexual things with but I had no intention of having a relationship with any of them).

And why did these women like me? Well, I was myself with them: fun, honest, bold and without wuss-bag behavior.

Oh, my feelings would well up inside me until I felt like I was about to burst my inner wuss-bag. 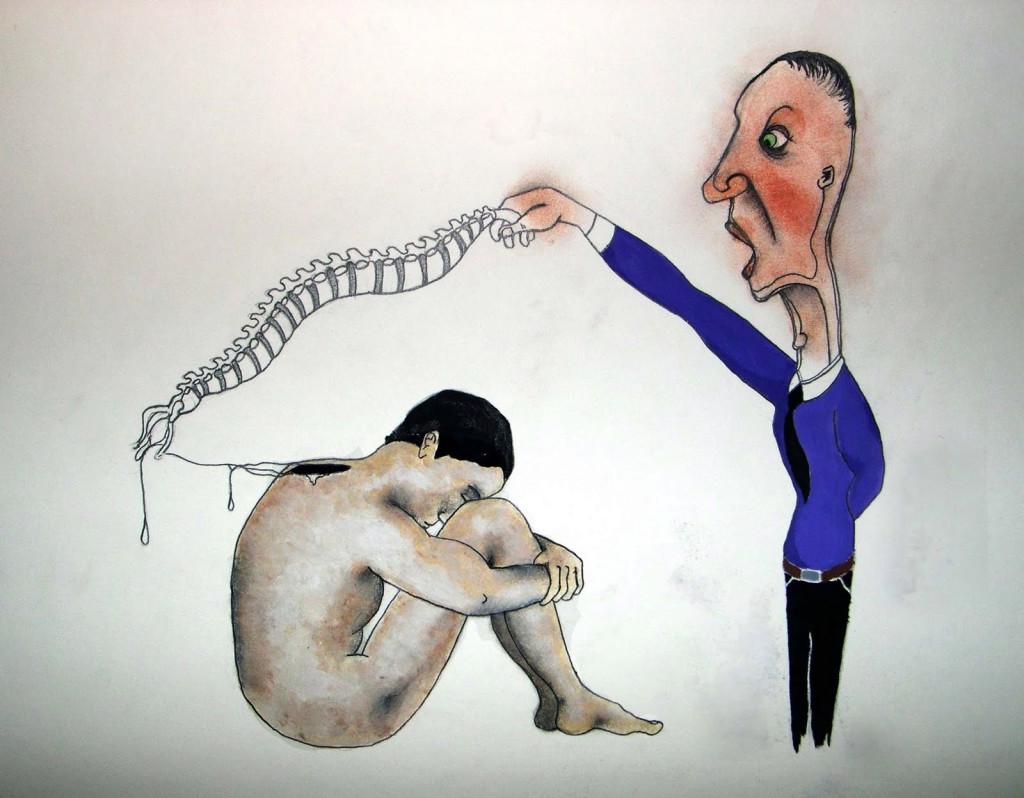 I fulfilled the STRONG DESIRE within myself to let her know her how great I thought she was and when she recoiled, ignored me or acted like she wanted to be my friend and nothing more the wussy tendencies reared their pathetic head….

Insecure and fearing abandonment I would ask her stupid, unattractive questions such as: what’s the matter? Don’t you like me?  And another brutal one was when we made plans to hang out and I’d ask: so… what do you want to do today?

In short, I put her on a pedestal, had no backbone and did whatever I could to appease her.

And the funny thing is I couldn’t figure out why she wasn’t into me. After all, I was being so nice and chivalrous. I was doing everything I saw in the movies yet I wasn’t seeing any results.

But I learned. Improved. Rewired my mind.

Don’t get mad at me.

Remember… I was once a mega wuss-bag.

Sure, I’m still a nice guy.

The women I date would tell you I’m a silly dork.

Yet they blow up my phone to see me. I get sex whenever I want it and I meet women daily.

So how is this possible?

…it’s because I have ONE THING in common with the bad boy.

I know you want to hear it…

The reason women are attracted to me—including the women I desire—is because like the bad boy—I know how to invoke emotion in a woman. 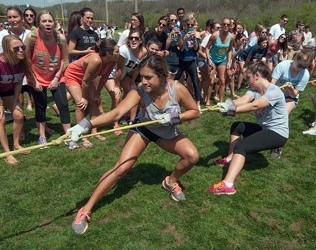 On the Other Side of This Rope Is a Man With Game….

What kind of emotion?

So much I could say on the subject….

For one, attraction with a woman is push and pull dynamics. I do my own thing and do what I enjoy. I’m not a people-pleaser.

And naturally, this is a quality women find attractive.

Yeah—feel free to honk those breasts like car horns.

OK—STOP! You’r getting carried away.

So you’re an attractive woman.

Guys are attracted to you, of course. They want to have sex with you, date you, marry you, and everything in between….

As a woman, if you’re social and meet new people on a semi-consistent basis then it’s safe to say every day of your life you get looked at, hit on, and asked out.

And most of these guys put you on a pedestal because they believe they themselves is simply not enough.

So they buy you gifts, take you out to dinner and in short, kiss your ass in hopes you will like them.

That’s the outcome they want.

Free dinners sound pretty great but admit it—only being liked for your looks would get old quick.

These guys would all morph into one huge, boring Voltron figure of non-attraction.

Men are logical and analytical. Women are emotional. Meaning they’re wired for a need to experience emotion.

If you’ve read my other articles you know how I feel about wussy nice guys: when they act abnormally nice to a woman and attempt to buy her affection with gifts they’re simply being manipulative (whether he realizes it or not).

I remember buying a stuffed animal for a girl on a first date when I was a freshman in college. She was a senior in high school at the time (yes—she was eighteen if you’re wondering!).

This girl was hot. And despite being a wuss-bag she came over to visit me one evening at my dorm room. She showed up drunk.

And she made out with me. I got her topless too but that was the extent of it. 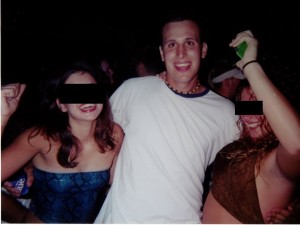 Me at 19… Sometimes a Wuss, Sometimes Good With Women

Where am I going with this?

Well, the funny part is a few weeks later I found out she went to a fraternity party and fucked a guy who lived across the hall from me (small world, eh?). And this guy had game. He was what one would consider a bad boy.

He was a nice guy (a laid-back, calm guy) but he was a partier who drank like a fish and did drugs.

He was also with a new girl every week.

I kept in contact with the chick in question and in roughly 2008 we hung out and we ended up back at my condo. And as she was playing with my D I closed my eyes and gave a thumbs-up to my 1999 me. It was all good.

So what was the difference?

It’s all about getting confident and improving yourself.

And I’m sure you’re wondering what I did to land my friend? Easy—I had fun.

And I was bold.

Fact: If a nice guy with wuss-bag tendencies acts the same around a woman he likes as he acts toward his buddies he will experience more success with women.

Not a manipulative guy trying to buy her affection with compliments and gifts.

Also, and this is vital—women want to experience a DEEP, EMOTIONAL CONNECTION with a man. If you want to learn how to create this within a woman then shoot me an e-mail. If enough guys ask for it I’ll take the time to write an article on the subject.

You know—it’s funny—and I’ve said this before (In my Don’t Buy Women Dinner & Gifts Article):

Most men have it backwards with women in that they shower her with gifts when they want to attract her. And if they’re ‘lucky’ enough to end up with her what happens?

Typically, the gifts stop and the guy takes her for granted.

I don’t buy a random woman gifts nor do I compliment her. A woman has to show me she’s worth it. I’ve got to get to know her—see that she’s a top-notch, awesome woman.

She must show me she’s worthy of me.

That sounds extreme and maybe even arrogant but it’s the truth.

And you should have this very same mindset.

And once I’m dating a woman guess what happens?

She gets some compliments.

I buy her gifts, also. Because she’s worth it.

And I do it because I want to—not to manipulate her or to get her to like me. She’s already with me. And for the right reasons—because she wants to be.

Well, in closing, let’s quickly cover the traits the bad boy has that the nice guy can adopt into his life to attract women and not be a wuss-bag:

–Don’t be a push-over. This means making decisions for what YOU want to do. Of course, if you like sushi and she hates sushi then don’t insist on going to a sushi place because she will dislike it. But don’t merely ask her, “Where do you want to go?” and plan everything around HER happiness.

Women LOVE  a man with a plan. Don’t ask her what she wants to do—make the plan and don’t tell her. Just take her there. Which leads me to the next…

–Be unpredictable. Bad boys are unpredictable. Both emotionally and action-wise. Women consider a bad boy exciting because they don’t know what he’s going to do next. He’s full of surprises. And surprises often create STRONG EMOTION.

-Be authentic and real. Bad boys do what they want when they want. Nice guys can do the same. Don’t do things merely to appease others. Do things to appease yourself. Of course, the difference is the bad boy tends to do things that are considered selfish and rude.

Also, it’s important not to do the things you don’t want to do. If a woman (or anyone else) asks you to do something you don’t want to do, don’t do it! When you adopt this into your life you will not only experience more success with women but your confidence and happiness will increase as well. 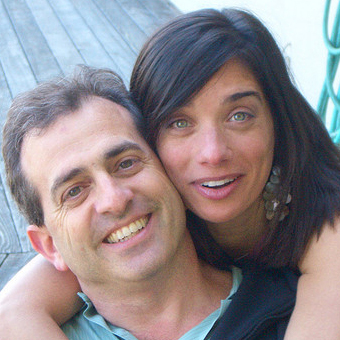 Adam Gilad With a Lady Friend

In the wise words of fellow dating coach Adam Gilad, “women want a bold man with an edge.”

Stop and think about those words for a moment.

A bold man does what he wants and more importantly, doesn’t hold back.

And his edge make him real. Perhaps even a little dangerous….

And no—I’m not telling you to be a tough guy or to ride a motorcycle up a ramp and into a pit of angry rattlesnakes.

My point is, women are very intuitive and they both consciously and subconsciously know when a man is being real and when he’s not.

Embrace yourself, your quirks and the soul you are. I hope you enjoyed reading my Why Do Women Like Bad Boys? article.

I STRONGLY advise you read this post by Adam Gilad as he’s an absolute expert when it comes to being a bold man who naturally attracts women without effort.

If this sounds like something you’d like to become then check his article out by clicking here.