As men, we’re not supposed to be afraid of things. Yet there’s one thing that scares the hell out of most men: approaching a woman. 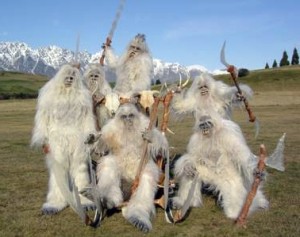 And I can relate—there was a time when approaching chicks scared me to the point where I would have rather fought a rabid ass-raping Yeti than approach an attractive woman.

When I would be out somewhere, I would notice an attractive woman I wanted to get to know and the moment I considered approaching her, I was suddenly gripped with paralyzing fear: first I froze, then my heart rate increased, and finally, I got those butterflies in my stomach.

And what happened next? Simple: NOTHING!

And when that is your reality, you’ve lost the game, my friend. GAME OVER.

And sure—I made the typical excuses, telling myself: ‘I’ll approach her in a bit’ or ‘It’s not like she can’t approach me….’.

You can probably relate to this aspect of my past. And all excuses aside, I’m sure you agree—denial is an ugly thing and it sure in the hell won’t get you laid.

Well, I happen to know a valuable secret a woman once told me…

…and when I heard it, I asked other women I knew if they thought the secret was true, and they said it was. Are you ready for this golden nugget? Good. Here it is….

When a woman realizes you’ve noticed her…

…the longer you wait to approach her, the less interested in you she’ll be.

Why? First, reread the above statement a few more times. Digest it. Let it flow. Got it? Good. Now here’s the answer:

Because women LOVE a man with confidence. And when she sees you standing there looking at her (or hovering around her hoping she’ll be the one to approach), she’ll become turned off because you’re not acting like a masculine man.

And it makes perfect sense. After all—if you don’t have the balls to approach a woman, she’s going to wonder what your issues are.

Women are intuitive, and like it or not, when they notice a guy they subconsciously go into ‘potential mate and father of my children mode’. And no—I’m not joking or being overly-dramatic. This has been proven in psychology.

And when women are in this mode, they consider:

(And by ‘crap ever hits the fan’ I’m referring to those bad things that could potentially happen.) 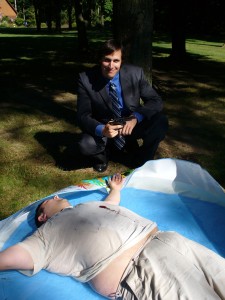 Here’s an extreme example… if a robber tries to break into your house during the night, are you going to be a wimp and hide inside your bedroom closet or are you going to protect your family by beating the snot out of the robber?

So what I’m telling you is whether it’s fair or not, a woman’s going to judge you when she realizes you’re too afraid to approach her.

So what’s a guy to do? Well, don’t worry—you know I’ve got you covered. Get ready…

…because I’m going to share some valuable information with you that will kick the crud out of your approach anxiety. No longer will you fear the approach.

When you see a woman you’re interested in, make a beeline for her before that voice inside your head has a chance to tell your body to get nervous.

And I know what some of you are thinking:

Well, that sounds good, but what do I say to her?

Easy. You say to her, “I noticed you and wanted to say hello.”

That’s right. No clever line needed. Because—and ask any attractive woman—pickup lines are lame and they turn women off. Why? Because opening with a pickup line shows the woman that instead of being yourself, you have to resort to trying to be clever or funny for her to accept you. 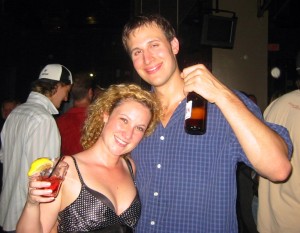 Sometimes Boldness Is Accompanied By Alcohol…

So when you see a woman, go get it!

And in the event she’s not interested, do yourself a favor and realize that you still have bigger balls than most men on planet earth. There’s absolutely no such thing as failure when you have the guts to try something bold.

Also, it’s actually really rare for a woman to be rude to guys who approach them.

Sure—if you use a stupid pickup line or say something inappropriate, a woman has a right to get mad. But if you say hello and she’s a jerk to you, chalk the experience up as her disqualifying herself to you.

After all, if a woman’s going to be mean to a guy who has the guts to walk over to her and say hello, then I think—and I’m sure you’ll agree with me on this—that this woman isn’t worth getting to know on any level.

To recap, here’s how you approach a woman you’re interested in:

1. When you see a woman you like, IMMEDIATELY walk over to her

3. Realize that you just approached a woman—the hard part’s over

4. Just be yourself and see where the conversation takes you

5. If you’re not into the chick, politely excuse yourself and repeat the process with another woman

I promise you this—by approaching women, your dating/sex life is going to get a whole heck of a lot better.

Until next time, take care, guys!